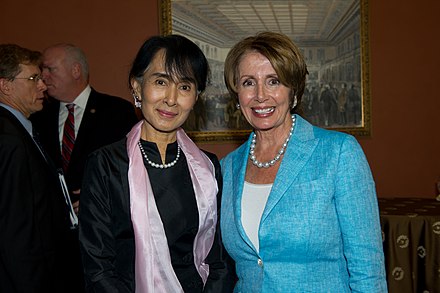 Nancy Pelosi and her husband have made tens of millions of dollars wheeling and dealing in the stock market, with considerable aid from Nancy’s insider knowledge of the legislation and regulations that might change the fortunes of some for good or for ill.  Now, that sweet easy money train might be coming to an end if some bipartisan congressmembers have their way.

They are girded by a super majority of 76 percent of Americans being in favor of ending the practice of lawmakers using their lawmaking powers to make their families millions at the expense of the constiuents they allegedly serve.

New polling by the Convention of States Action indicates that at least 76 percent of voters in the U.S. believe that legislators and their family members should not be allowed to trade stocks during their tenure in Congress because they have an “unfair advantage.”

Only 5 percent of voters agreed with Pelosi, who recently rejected the belief that legislators and their spouses should be barred from trading.

“We are a free market economy that should be able to participate in that,” Pelosi said in a press conference in December.

Like many others in Congress, Pelosi and her husband, Paul Pelosi, a San Francisco real estate investment mogul, have poured tons of money into the stock…