Turkey Pushes Cyprus to Re-Unite in Opposition to Turkey 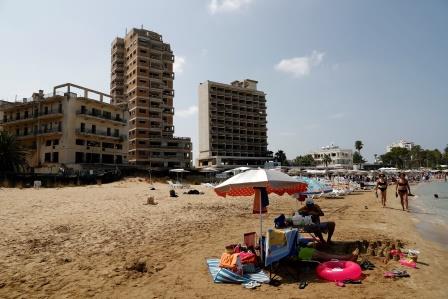 In his sun-filled office in north Nicosia, Şener Elcil is plotting his next protest. Anger, he says, is in the air in Turkish-occupied northern Cyprus.

The economy is in freefall, thanks to the self-declared republic’s financial and political dependence on Turkey. Thousands have taken to the streets, spurred by inflation rates that have left many struggling to make ends meet; ahead of parliamentary polls later this month, calls for a boycott are mounting, while a blacklist of Turkish Cypriot dissidents, reportedly drawn up at the behest of Ankara, has spawned consternation and fear.

“Turkey is our biggest problem,” says Elcil, who heads the Turkish Cypriot teachers’ union and is a vocal proponent of reunification of the war-divided island under a federal umbrella with the Greek-run south. “It should keep its hands off Cyprus and take its lira and go away.”