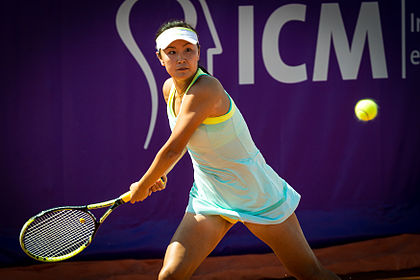 The World’s number one women’s doubles tennis star is Peng Shuai, a Chinese Citizen. Last Month, Peng Shuai recently accused a Chinese Official of sexual assault. She disappeared for three weeks. She recently showed up in a video conference call with the IOC, the International Olympic Committee.
That Committee appears satisfied with the results of the call. This is the same committee still committed to doing the Beijing Olympics while China continues its elimination of the Uyghurs and executes dissidents without any trial whatsoever.
The WTA, which is not so China dependent, it would seem, is not satisfied and is still pressing for more investigations and accountability by the Chinese government, lest that government potentially face sanctions from the WTA itself.

A video call between the head of the International Olympic Committee and Chinese tennis player Peng Shuai, whose nearly three-week disappearance from public view sparked an outcry, was meant to reassure the world that she was safe – but instead has raised more questions.

Concern grew in the last week for the former No. 1-ranked doubles player _ who hadn’t been seen since accusing a senior Chinese official of sexual assault on Nov. 2. Tennis stars and fans alike demanded to know #WhereIsPengShuai, and the head of the Women’s Tennis Association threatened to pull lucrative events from China.

On Sunday, the IOC said Peng spoke to its president, Thomas Bach, and other officials in a 30-minute video call from Beijing……

The IOC’s short statement, which offered few details and no follow-up on her allegations, seems unlikely to close the door on Peng’s case _ and it’s leading to increasing criticism of the sports body, which was already facing calls for a boycott of the Beijing Winter Olympics, which open on Feb. 4.