Brazil Shows How the Right Can be SJW Too 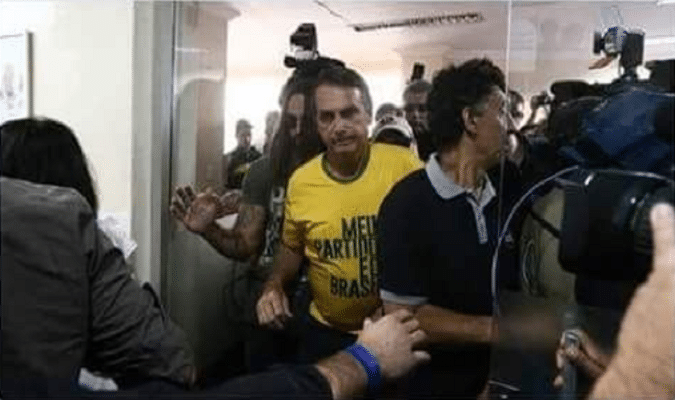 In the battle for the definition of value, humans have long created villains and heroes, angels and demons, to help the masses understand knowingly the value as defined by authority.

It is only, fundamentally, in the past hundred years or so that humans have begun to systematically formulate understanding and theory of the power of language to make of its own accord.  The one who controls the canon of language will live to make people in that one’s image.  Language makes the man, but a select few define the value assumptions and definitions that give language its human creating power.

The plans have never gone perfectly well, and some lasted only as long as the charismatic leader that orchestrated the whole thing lived.  Long before language theorists, humans have intuitively understood the need to control the value and definition of language, which, for the ancients, and for the 20th century theoreticians, language is the whole expression, what has emerged to become semiotics, the study of signs and symbols.

Today, the battles being fought are mostly targeted at and executed by humans who have lived the blink of an eye, mere 30 years old and less, who have emerged from a culture that has significantly devalued historical training in any global, holistic sense, offering only memory-retention dependent courses in select epochs of time, mostly not even directly related to one another.

Their understanding of the emrgence of human thought as an exploration beyond the necessity of daily need is near-nil.  Their understanding of ancient cultures throughout the world is virtually non-existent.  Even having knowledge of history and sharing it with others is usually met with a roll of the eye and a quick bow out of some form like, “I’m just not into history.”

This is the cultural backdrop that allows the ancient battle for the power to hold the canon of value and definition of language, even semiotics as a whole, to seem like an innovation that might just this time break the chain of evil and create harmony and love for the people that are actually human, no matter the cost to the ones who are not so quite human after all.

These are old declarations with new labels but the same power, the visceral power to move humanity with the wave of an emotional sophiistry, clever defenses of their moral supremacist assumptions that have, at the heart of them, no logical, rational, moral, or ethical consistency beyond the demonization of one group and fetishization and deification of another.

This story is a wonderful highlight of the absurdity of the moral supremacist, revengatarian code, throughout history.   The writer, Tim Cushing, seems to be quite upset with Brazil for possibly passing “Fake News” Legislation to stop the fake news, the misinformation, the dangerous information, from getting out.

These words, fake news, misinformation, heresy, blasphemy, treason, sedition, terrorism, these words are part of a collection of words that have the authority of death behind them, for these words themselvles, in the minds of humans who have come to believe, be it coercively or otherwise led to that belief, that those who are guilty of sharing such things are worthless and disposable.

Not only will they not help their neighbor if the state drags them off for being fake news or dangerous or racist or etc, etc, etc, they might have been the ones to turn them in.  They also might know the neighbor was innocent but they knew that the state would give them their neighbor’s house as a reward for turning them in, and their house has a pool.

Call me skeptical when it comes to my assumption that Tim Cushing might see these same dangerous tyrannical traits in a DNC-sponsored morali supremacist ideology seeking to create humans in their image by rigidly controlling, through threat of death, the value and definition of semiotics.

Taking a cue from the then Demagogue-in-Chief of the United States, Brazil’s government decided something must be done to control the spread of “fake news” to give the government more control of the narrative. “Fake news” continues to be a handy concept to abuse by governments seeking to limit their constituents’ ability to consume or create content. That was Donald Trump’s rationale as well, even if it was never articulated with any clarity or cohesiveness.

Brazil’s government liked the abusability of “fake news” and turned it into legislation. But before it did that, it gave itself some more power. It “mobilized” the federal police to combat “fake news” ahead of the country’s 2018 elections. It gave people with guns the power to regulate the internet, allowing them to “identify and punish” people who published whatever those in power said was “fake.”