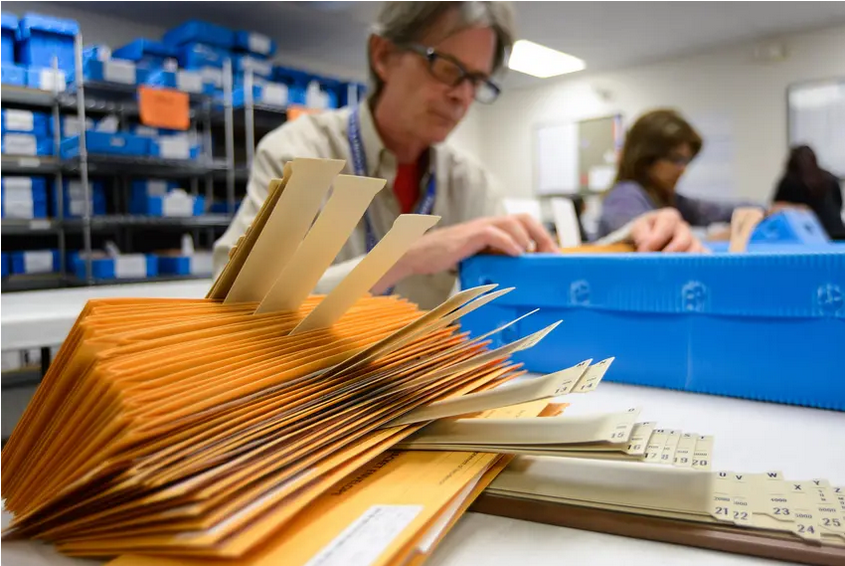 The DNC is attempting to finally push through its mail-in voting bill that seems  designed to make it easier to certify elections by the FEC by rmoving the bipartisan requirement the FEC currently has in place.

National Review caught that little FEC bit buried deep in the bill and offered an effective description of the nature of the part of the Orwellian-named the Freedom to Vote Act, which  should  be renamed the Freedom to Control Mass Mailer Elections Bill.

Tucked inside a supposedly ‘moderate’ voting bill is a provision that would empower a lone bureaucrat to wield outsized control over elections.

Deep inside the Democrats’ latest “compromise” proposal on elections and campaign finance is a new cup of poison for free speech and fair campaigns.

Of course, the sponsors bragged that they dropped some controversial provisions. One such provision altered the Federal Election Commission (FEC), which polices campaign-finance laws, from a bipartisan agency to one with a partisan majority appointed by the president.

The bill, now dubbed the Freedom to Vote Act, abandons that direct attempt to give the president a partisan majority at the FEC. But it still abolishes the principle of bipartisan approval of enforcement actions. Even worse, it rigs court review of FEC decisions…

At this moment, the Orwellian Freedom  to Vote Act faces a final hurdle, the filibuster.  Fox News created an effective headline that made clear this bill was no mere voting reform bill, it will fundamentally change the way we have conducted voted, allowing for wholesale opportunities for fraud at multiple levels, from the village to the nation.

The Senate is expected to hold a procedural vote Wednesday afternoon to end a filibuster on an election bill that would impose national standards on how states conduct federal elections, including requirements for mail-in voting and automatic voter registration.

Democrats’ efforts to break the filibuster are expected to fail, as they would need ten Republicans to achieve the necessary 60 votes to move forward on the bill. So far, no Republican appears to be in favor of this.

The 592-page bill, known as the “Freedom to Vote Act,” includes sweeping reforms that include the requirement of states to provide automatic voter registration, as well as online and same-day registration. It also calls for making Election Day a public holiday.

Several provisions in the bill call for significant expansion of absentee voting by mail. It prohibits states from placing any conditions or…

The  usual suspects decided to be the emotional glitter grandstanders of the DNC,  with Alyssa Milano being the main story on that front, getting herself arrested protesting the failure to pass the Orwellian named Freedom to Vote Act.  Note that The Hill headline chose to couch the bill as a “voting rights act,” making this publication complicit in the effort to trick the American people to accept a fundamentally un-democratic, un-republican method of voting, mass mailer voting, and certification that no longer required bipartisan support.

Actress Alyssa Milano was arrested during a voting rights protest at the White House on Tuesday as the Senate gears up for a vote on the Freedom to Vote Act, a scaled-back version of the voting rights bill that Senate Republicans blocked in June.

Milano announced her arrest in a tweet Tuesday afternoon. She said she had been demonstrating with People for the American Way, a progressive nonprofit organization that advocates for equal rights and constitutional liberties.

The actress said she was arrested “for demanding the Biden Administration and the Senate to use their mandate to protect voting rights.”

“Stand with me and [People for the American Way] and tell the Senate and White House that voting rights shouldn’t depend on where you live,” she added.

I was just arrested for demanding the Biden Administration and the Senate to use their mandate to protect voting rights. Stand with me and @peoplefor and tell the Senate and White House that voting rights shouldn’t depend on…

Reuters follows the Hill in choosing to  couch this bill as a rights bill and not a mass mailer election bill.  There has, to date, been minimal effort by the DNC media to explain to the American  people what this bill actually is beyond using words like rights and words like racist to define election standards that seek to preserve the reliabilty of Democratic elections (like voter ID, like not having mass mailer elections, like not using foreign companies to run our digital ballots, etc).

Would the American people really support mass mailer Presidential elections if it was made clear to them that this is what this bill creates?  Reuters certainly isn’t interested in serving you with this information, putting the DNC agenda ahead of journallism once again.

The chamber’s 50 Republicans are expected to block the measure from advancing, a move that could bring new pressure on Democrats to change the Senate’s “filibuster” rule that requires a supermajority of 60 votes to pass most legislation.

Senator Angus King, an independent who aligns with Democrats, told reporters that if Republicans again block the bill, “we would either have to figure out a rule change or we have to try to have discussions toward a compromise solution.”

Many Democrats have been calling for a scaling back or elimination of the filibuster to make it easier to pass President Joe Biden’s agenda over the objections of top Senate Republican Mitch McConnell.

Biden, himself a veteran of the Senate,…

The GOP are not a reliable lot, and all it takes is a few to be peeled off by promises of being liked by people who not so secretly think they’re really just all racists and bigots and should all be permanently cancelled.  The GOP loves the abuse, it seems, so forcasting an outcome for this is a bit difficult given the malleability of this party.  But if I had to bet a donut, and I just might, but only certain kinds (not all donuts are equal), I’d go with a filibsuter being successful at stopping this bill.

But if the bill passes, the GOP, or any other DNC opponent, will never win a race the DNC wants to win ever again, though I don’t imagine that power will last long once it becomes clear what it does when the overwhelming majority choose against the DNC.

Of coruse, I should add, the next battle will be the courts, and then states will pass laws denying the Federal ones, and those laws will go to the courts.  The final decision most likely will not happen before the 2022 election, meaning, even if the bill passes, it won’t be implemented in this election cycle, making the 2022 election criticial for any who oppose the DNC.

The problem is this, that opposition is mostly found dependent on the GOP, andd the GOP, at the top at least, is run by collusionists, so even if the GOP wins, it will not effectively halt the DNC advance, set to resume after 2024, after the GOP allows the Freedom to Vote Act to take effect.  But maybe I’m just being cynical.